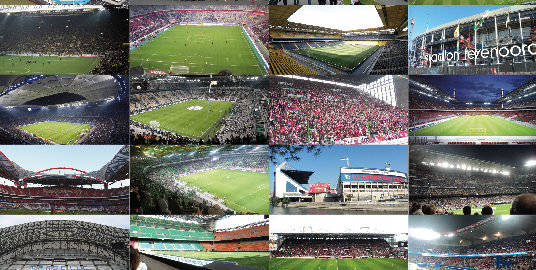 Where are the must-visit football venues in continental Europe? That was the question UK readers of Football Weekends magazine were asked, and they came up with a top 30 list of their favourite European stadiums (excluding Great Britain and Ireland).

Here we profile the stadiums that finished in positions 20-11.

It may not look much from the outside, but inside the Mestalla is simply majestic – the steep sides look stunning even when it’s empty, thanks to the striking orange and black coloured seats. The stadium is largely open, but the 12,000 capacity main stand together with archaic looking roof dating from the 1950s still remain.

At the height of their success in the 2000s, the club did start work on a brand new stadium. But amid financial woes the work stalled, and remains an unused site to this day. It may yet proceed – but we’re sure there should still be plenty of time for you to visit the marvellous Mestalla.

This passionate hotbed of football is the pride of Spain’s Basque region. The cauldron of the old San Mamés stadium was much loved and there were concerns the new venue next door wouldn’t match it.

Well, according to many visitors the new venue still ticks the boxes. It may be modern and shiny new but the famous Atletic passion seems to have seamlessly transferred into it. The Basque region has its new footballing home.

For two nights in a 3-star hotel in central Bilbao in a double room including breakfast, and your match ticket, the price per person (excluding flight) is from 1995 SEK /185 GBP.

Book your trip to see Athletic Bilbao with Nickes.Com!

Anderlecht are one of Europe’s famous clubs, with five European trophies in the bag from the late 70s and early 80s, and as such the Constant Vanden Stockstadion has seen its fair share of great games.

This is another stadium which will has a design familiar to British visitors, with four separate stands connected at the corners, low roofs and fans right on the pitch. Anderlecht are consistently Belgium’s best supported club so expect a decent atmosphere at virtually any game.

It is great to visit a delightful city, and the chocolate box beauty of Bruges certainly ticks that box. But it’s an added bonus when there’s football to build in to your trip, with a decent ground too. The architecture of the Jan Breydelstadion, with some portions still open to the elements, is a world apart from the medieval buildings of the city centre and that’s just fine.

Club Brugge are the more successful and well known of the two clubs that call it home (Cercle are the other) and their fans create a lively, dynamic atmosphere inside.

The home of Sampdoria and Genoa has certainly left an impression on many football tourists. Perhaps that’s because it’s quite an untypical Italian ground with four English-style sides –apparently Championship club Preston based their rebuilt ground on it.

Also known as Marassi, after the district it’s in, it was Genoa’s stadium when it opened in 1911, with Sampdoria moving in after the Second World War. It was rebuilt for the 1990 World Cup.

For two nights in a 3-star hotel in central Genoa in a double room including breakfast, and your match ticket, the price per person (excluding flight) is from 1795 SEK /165 GBP.

Book your trip to Genoa with Nickes.Com!

The home of the very first Bundesliga champions is the only place we know where you’ll see a goat munching by the side of the pitch during a match. Hennes is the club mascot, and the present goat is the eighth to take on the role – so he’s Hennes VIII, translated as Henry VIII.

The RheinEnergieSTADION, rebuilt for the 2006 World Cup, is popular as it has four separate stands, English style.The anthem Wir stol No dir, is among the most passionate sung in Germany. Don’t worry if you can’t speak the lingo, the words are on the big screen.

For two nights in a 3-star hotel in central Cologne in a double room including breakfast, and your match ticket, the price per person (excluding flight) is from 1995 SEK /185 GBP.

Book your trip to see FC Köln with Nickes.Com!

De Kuip has rightly earned a reputation as one of the most passionate grounds in Europe. It’s packed virtually every week when the good people of Rotterdam turn it into a fortress, to watch Feyenoord, particularly when the likes of Ajax or PSV are in town. Like Rotterdam itself, it’s bold and striking.

It may be slightly smaller than Ajax’s stadium but it has history on its side, dating back to 1937. Ten European finals have been played here, it hosted the Euro 2000 final and is still the venue for the Dutch domestic cup final.

If Crvena Zvezda Beograd doesn’t mean much to you then their more familiar English name will do –  Red Star Belgrade. And Stadion Rajko Mitić is the most famous stadium in the Balkans, nicknamed the Marakana for some similarities to the iconic stadium in Brazil.

For regular Serbian league fixtures it won’t be that full. However all that changes for the Eternal Derby against Partizan from just over the road – not for the faint-hearted, this is commonly considered one of the most must-see fixtures in European football.

At the time it opened 20 years ago the Amsterdam ArenA, complete with retractable roof, was one of the most state of the art stadiums on earth. Many have been built since but it remains an impressive venue, multi-purpose too – with the world’s greatest rock stars performing here.

It is the home of Ajax, and also frequently the Dutch national team while in the past it was a Champion League final venue and hosted games in Euro 2000.

For two nights in a 3-star hotel in central Amsterdam in a double room including breakfast, and your match ticket, the price per person (excluding flight) is from 2095 SEK /190 GBP.

Book your trip to see Ajax with Nickes.Com!

It is called the stadium of light in a country where the sun seems to shine all the time. Built for the Euro 2004 final, the sweeping, sloping roofs of the stadium fit perfectly with the laid-back vibe of Lisbon. It was voted Europe’s most beautiful stadium by a French newspaper. That similar style can be seen at Arsenal’s Emirates Stadium in London.

Benfica are the team who play there. They are one of the giants of European football, and only Real Madrid have played more European Cup/ Champions League campaigns.

For two nights in a 3-star hotel in central Lisbon in a double room including breakfast, and your match ticket, the price per person (excluding flight) is from 1495 SEK /139 GBP.

Book your trip to see Benfica with Nickes.Com!